Hello friends! This past weekend was an absolute whirlwind of activity around here.  Our new sectional arrived (which I cannot wait to show you!); I hung some art and a shelf; I walked the dogs and listened to a new to me podcast; I picked up a vintage table; we took a walk to the park and Wilder had his first moment in a bucket swing; and of course, we watched the super bowl.  All in all, it was a good weekend.  I also feasted a little more than I should have because I am starting Whole30 this week…. gotta have the pre-clean-eating fattening up! Anyhow, today I am going to be sharing with you the progress I’ve made in another area of our house, Emmy’s bedroom!  Before we moved, Emmy knew that she wanted to totally redesign her bedroom.  No more colorful bohemian bedroom for her, my baby is growing up! Instead, she wanted a neutral tween girl retreat, full of black, white and gray, loads of textures, string lights, and she knew she had to have a gold canopy bed. Because we moved the older kids at a more challenging time in their childhoods, it has been important to me that they each have a bedroom that is exactly what they want.  We made a plan for the room before we ever left Maryland, and today I am going to show you our tween girl retreat progress. This post contains affiliate links as well as a shoppable gallery for your convenience. 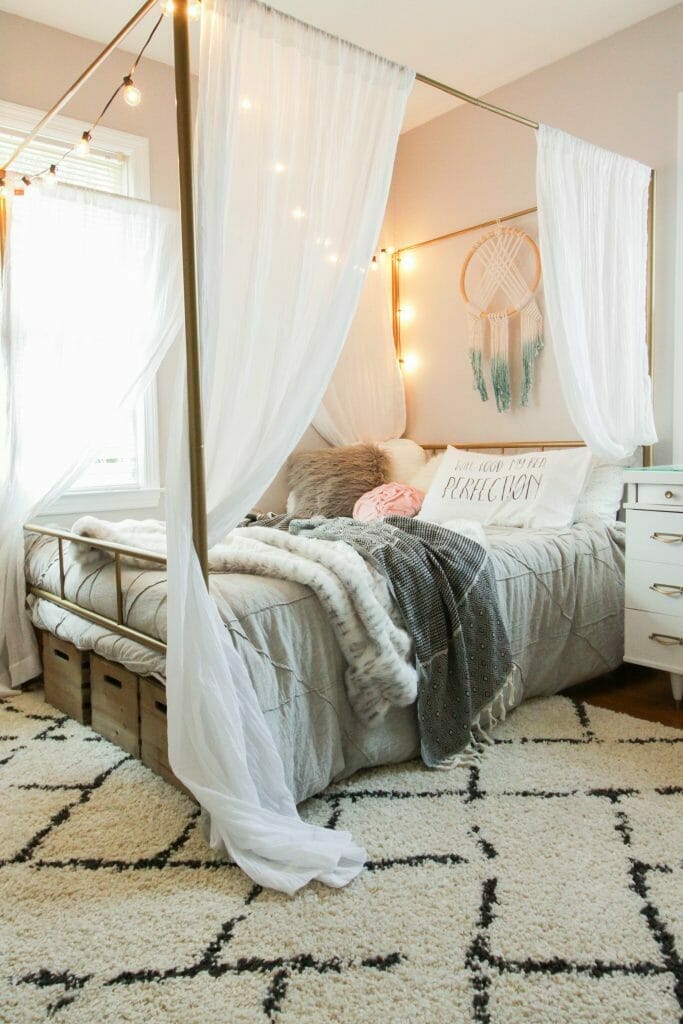 Let’s start by talking about that bed, because that was THE ONE THING she had her little heart set on, a gold canopy bed! We went with the Marion bed from the Novogratz which is ridiculously affordable and looks fabulous put together.  It does take some effort to put it together but I was able to do it by myself. Emmy knew she wanted white sheer curtains and lights hanging on the bed.  We headed to target to grab those items and found these sheer curtains that had a nice texture from Opalhouse, and these string lights. While Target carries so many fun string light options, Emmy wanted a simple black style. 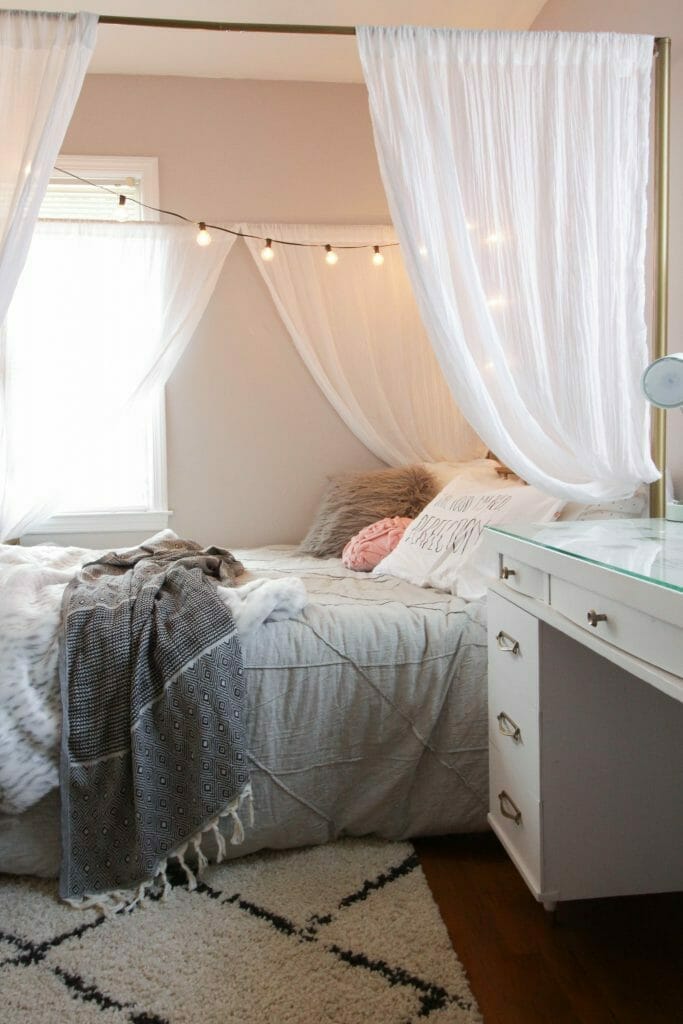 Another piece we selected before we moved was the gorgeous rug you see.  Emmy selected the Nepal by Nicole Miller from Homedynamix.  I can’t even begin to tell you how much I looooove this rug and want it for my own room.  It has a great soft texture without having too much fluff, if you know what I mean.  It also features fringe on each end.  Emmy loves the uneven pattern and colors in this rug and spends many of her days playing with her American Girl dolls on this very rug.  Yesterday I walked in on a lemonade party, and the other day when she was at school I walked in to find her dolls all tucked in under blankets on the floor.  My girl is growing up, but these moments remind me that she’s still somewhat little.

As for the bedding, Emmy knew that she wanted a gray duvet cover.  Before we left Maryland, we took a trip to Lancaster and visited the outlets there.  She found the perfect cozy duvet cover at the West Elm outlet. I was actually on the hunt for a new duvet cover for myself at the time and contemplated getting it as well… Emmy said she wouldn’t mind, but I decided it would be boring if we had the same one. 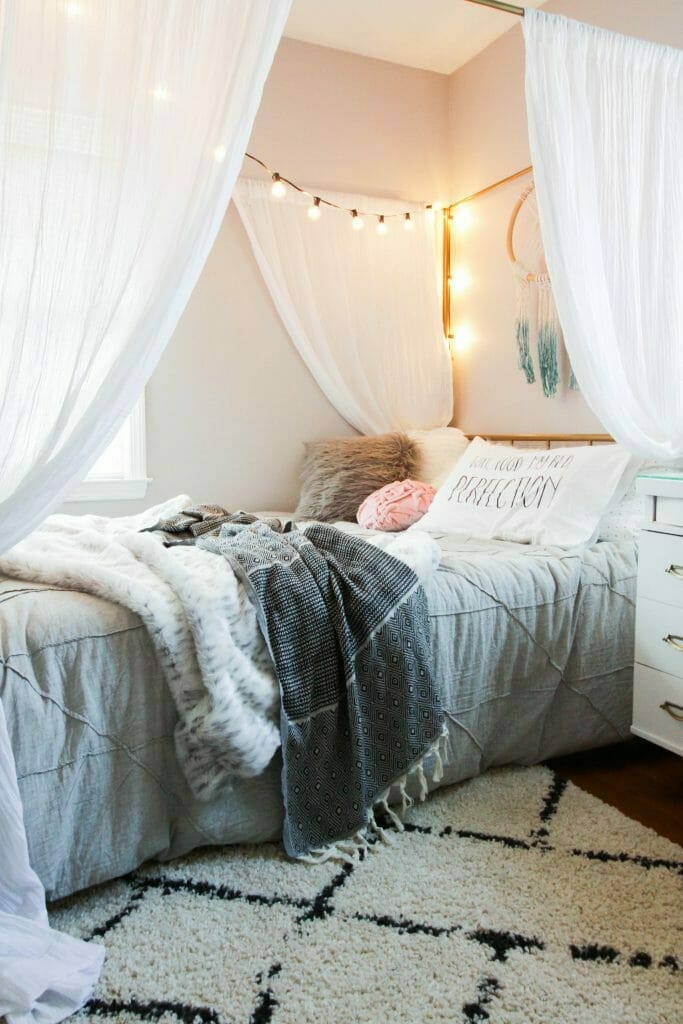 It has such a great simple pattern and texture that add just enough interest.  You might also notice the blankets on her bed.  She loves to be buried under layers, and had her heart set on a faux fur throw.  When we came across the snow leopard throw at the Pottery Barn outlet, she had to have it!  We had sold her hanging chair, so I let her put that money towards her new room and it covered the duvet cover as well as her fur blanket.  And I have to say, they look perfect together, and her bed is the coziest in the house. The black and white throw was gifted to me from my friends at Case & Drift, and I passed it onto Emmy because when it came in the mail her eyes got all huge and she fell in love and I am a sucker. True story. 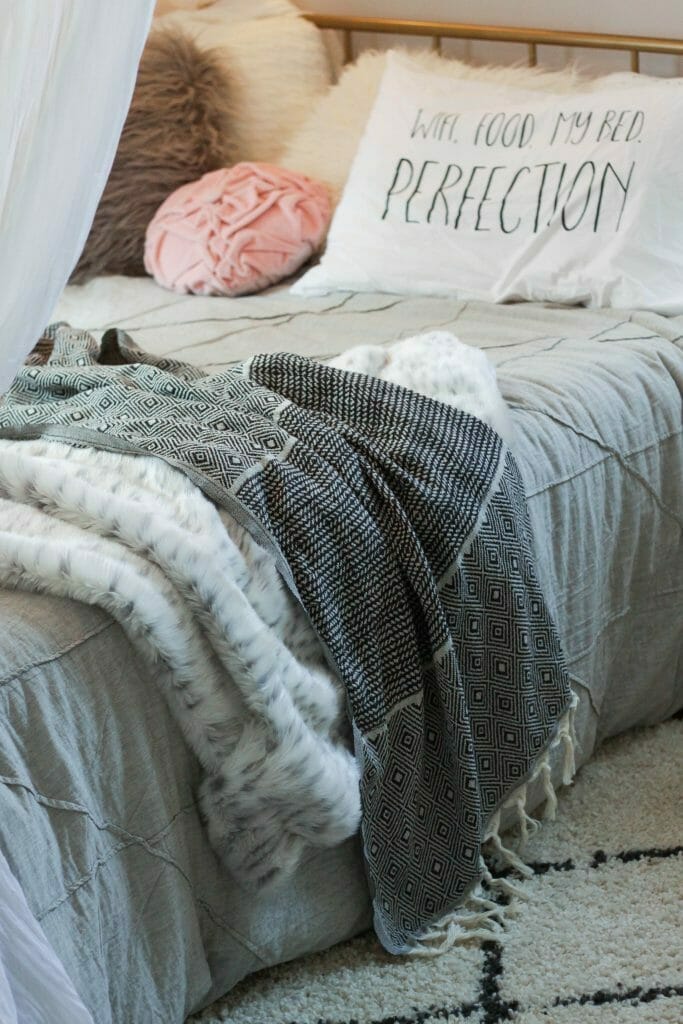 Finally, let me show you her new pillows. 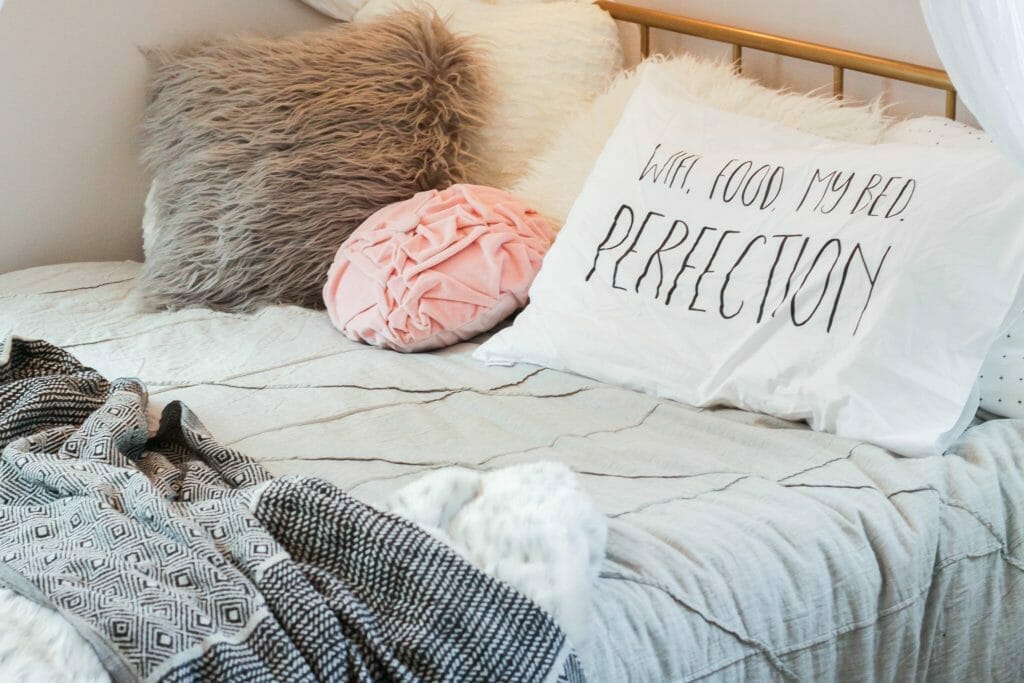 For Christmas, we found her the perfect pillow case that suits her to a T… “wifi, food, my bed, perfection.”  Frankly, I think it would suit me as well! I found it on etsy, and made it a gift from the boys. Not pictured, I also recently found her the cutest gray and white hedgehog pillowcases at TJ Maxx, so we have those for when this is in the wash.  I already had the pink velvet pillow on hand as well as both of the fur pillows.  I just let her go through what I had and select what she wanted to use.  At first I thought it was silly not to just use two white fur OR two gray fur and instead opt for one of each, but it actually really works.  Glad I let her take the reins on those choices.

One last thing I want to mention while I’m showing you her bed… storage!  Her room here is a little bit smaller than her old bedroom, and she lost a lot of storage space in the closet.  We’re having to get a little creative.  Emmy wanted a bit of wood tones in her room, and needed underbed storage desperately.  I repurposed these crates we used to have on our old kitchen island because they are the perfect fit, and I wasn’t using them anywhere else here. 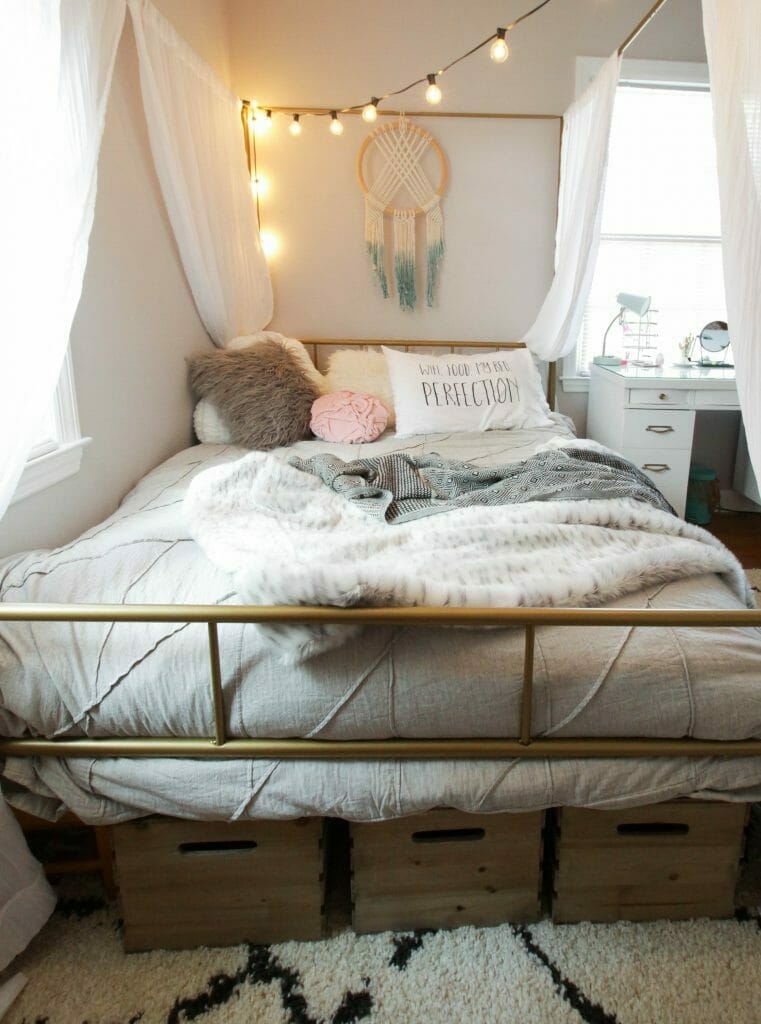 Emmy and I are both really  happy with how this room is coming together.  We still have some work to do and eventually will need to paint it as the gray in here reads a little purple toned at times, but we are getting there.  She loves spending time in her room now, and to me that is a success.  Actually, sometimes it’s hard to get her out of there, especially in the morning. 😉 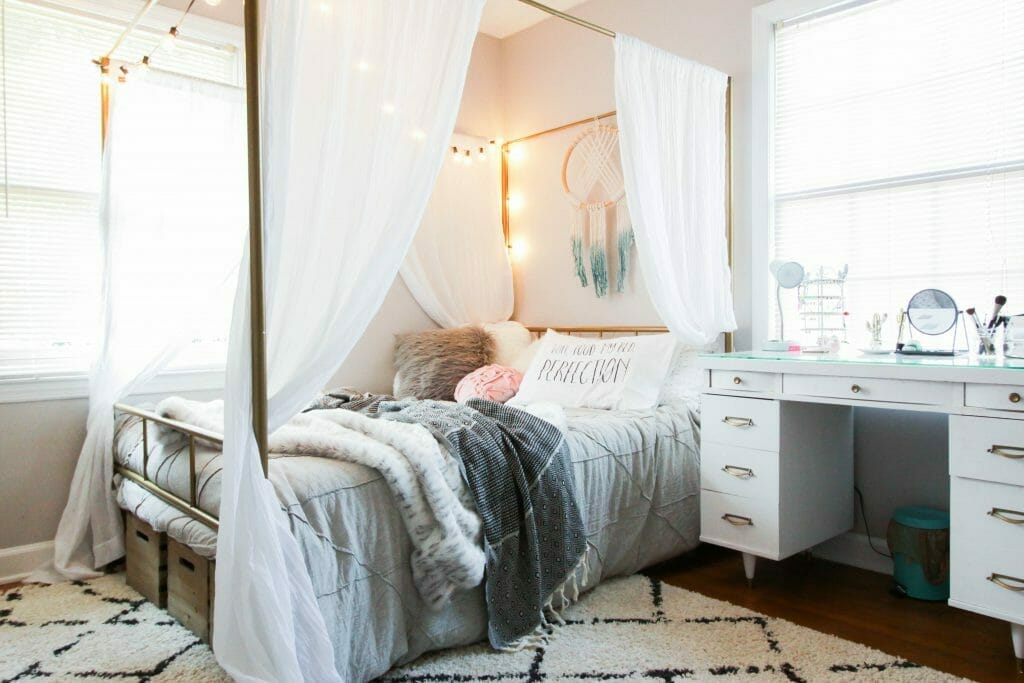 * I’ve put together a little shoppable gallery below in case you saw anything today that you are interested in, and everything is pretty budget friendly.