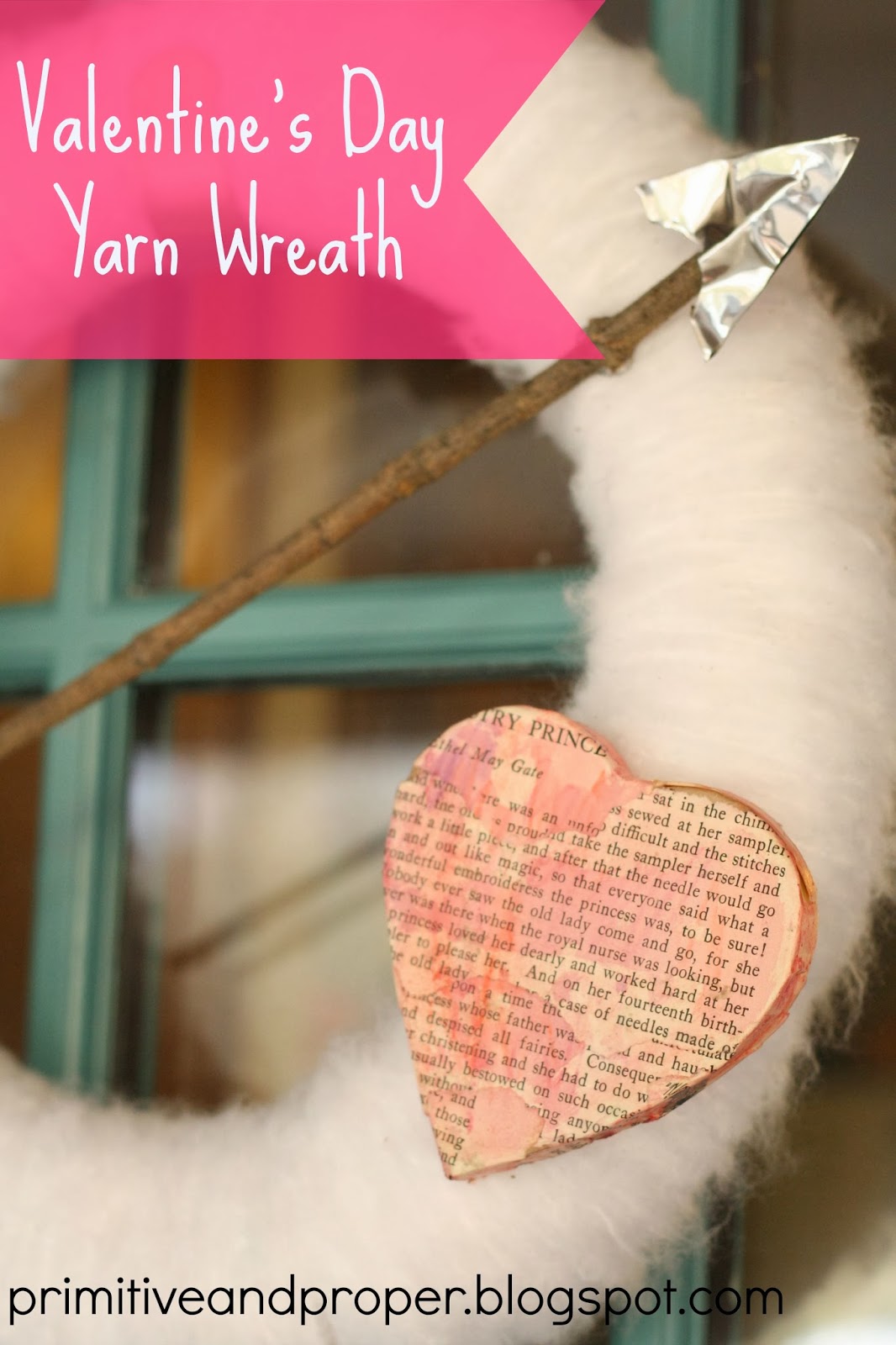 This post was written yesterday and scheduled to go up today at 6 am.  I went to bed last night at 10:30, and woke at 11:45, to Chris touching my arm to tell me something. As soon as I opened my eyes, I could see the flashing lights through my window, and I could hear the screech of sirens…. several of them.  Chris told me, “Cassie, wake up!  The neighbor’s house is on fire!”  I looked out the window to see not only the flashing lights, but big, bright orange flames.  Trucks arrived from the surrounding towns’ fire departments as well to put out the fire.  I tried to go back to sleep since I was getting up at 6 to meet a friend at the gym (I did not go and am updating this post instead because we also got an inch or so of snow, and with all the trucks and action, our street is not plowed.)  ANOTHER UPDATE: My friend just heard on the news that two children died in the fire.  I have tears in my eyes as I type this.  They have also lost most of their home.  I didn’t know them well, but I know in times like these all the help is needed.  Please keep my neighbors in your thoughts and prayers…. they have a long road ahead of them.  I am hoping to see them outside what’s left of their home soon, so I can offer up any help I might be able to give, and if nothing else, just let them know we are here.  I still am in shock as I type this…. The kids and I have already mapped out our escapes and where we would meet in case of a fire, and they know that once they get out, they do not go back in no matter if Mommy and Daddy are with them or not.  Today, we will revisit that escape route and plan.  You never know when something like this could happen, and if you don’t already have a fire escape plan with your family, I strongly encourage you to make one.

Now back to the scheduled post:
I don’t do a whole lot of decorating for Valentine’s Day, so I figured I could cram what little I did into one chock full post for you. 🙂  Yesterday I shared with you my winter mantle, which carried us from New Year’s Eve all the way through Emmy’s snow fairy party.  After Emmy’s party I was ready to switch gears to Valentine’s mode, but I wanted to keep it pretty simple.

I kept the mantle itself clean in all simple whites and silver, and then re-used the banner I made last year. 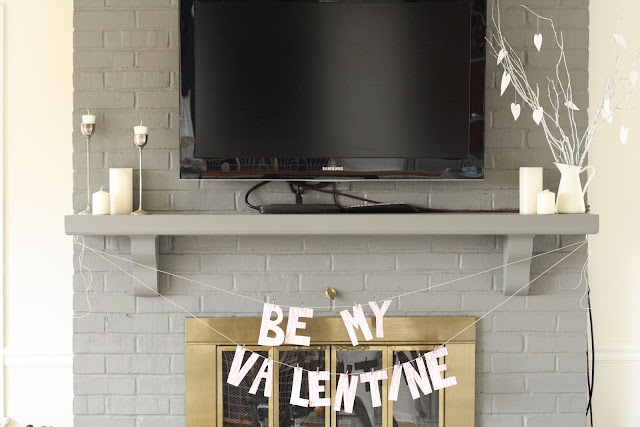 On the right I kept the same pitcher and silver branches I had on my winter mantle, and added some white paper hearts.  I also added a couple white candles. 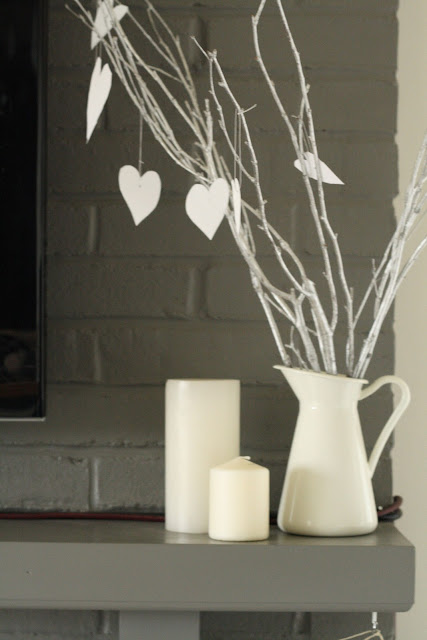 I had some help from Emmy with the cutting out of hearts…. 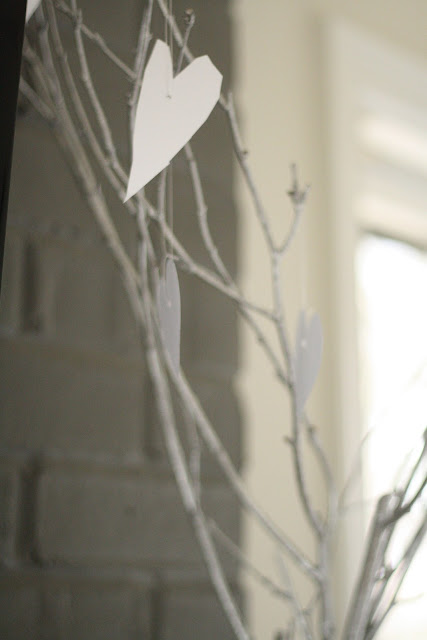 And some I cut.  Can you tell who did which ones? 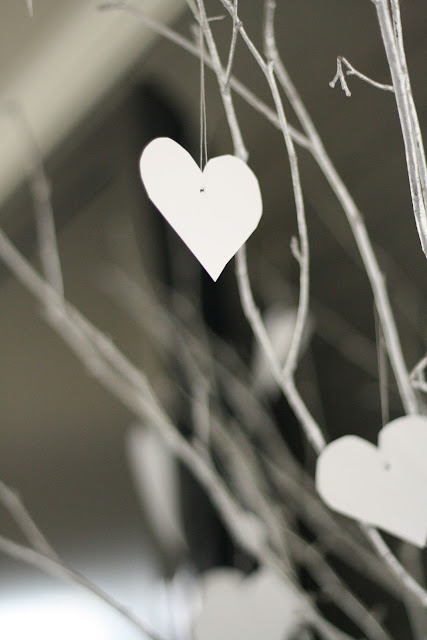 On the left side, some simple thrifted silver candlesticks and white candles…. 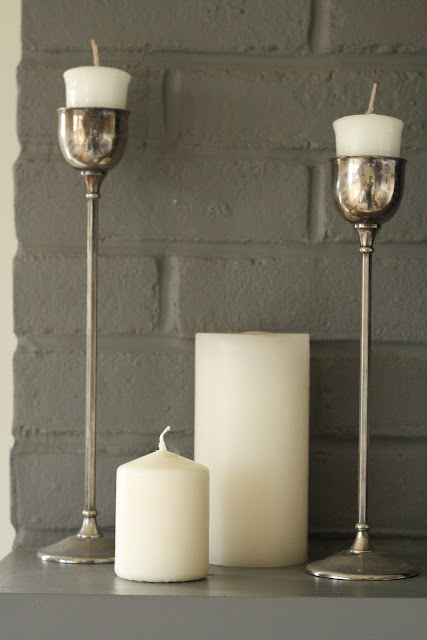 And below, the pink and white zebra banner I made last year.  I still love its simplicity and hand made look. 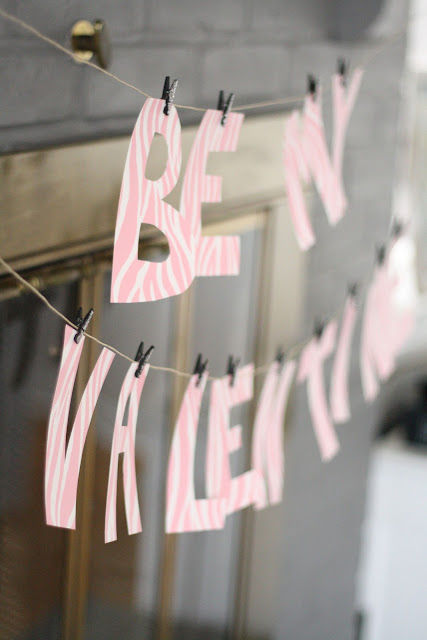 Aside from the mantle, I have just a couple other little touches around the house.

In the dining room, a line from my all time favorite movie is written on the chalkboard, and I draped a simple pipe cleaner garland I made last year. 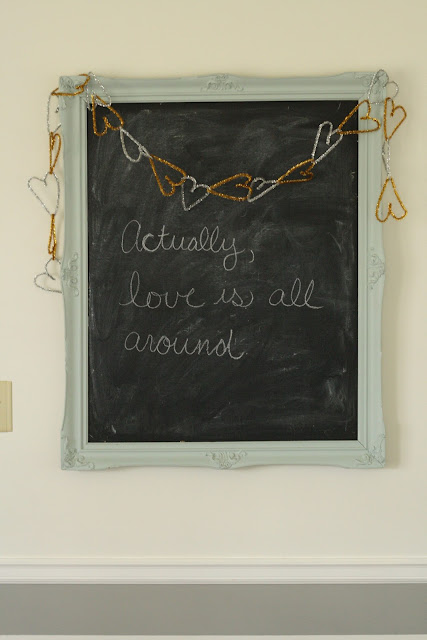 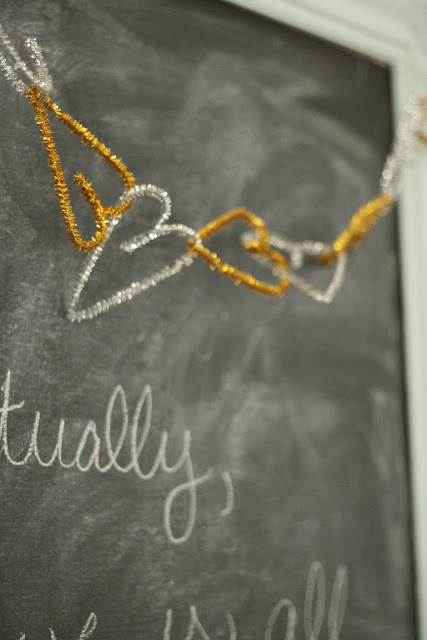 And the buffet also has a couple small touches… (and a paper dog that Sawyer made). 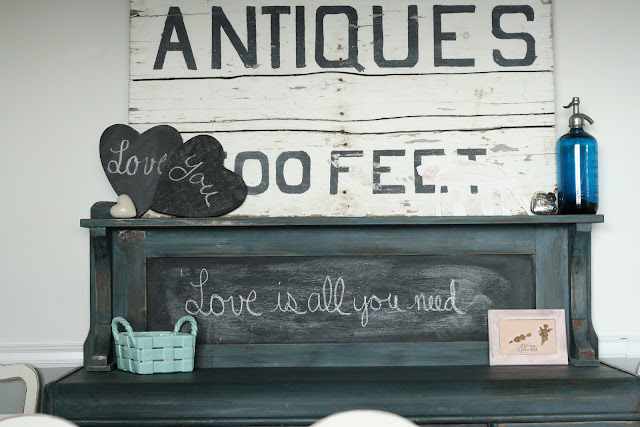 And the one thing I really did want was a new Valentine’s wreath for my door.  I made one a couple years back out of candy hearts… 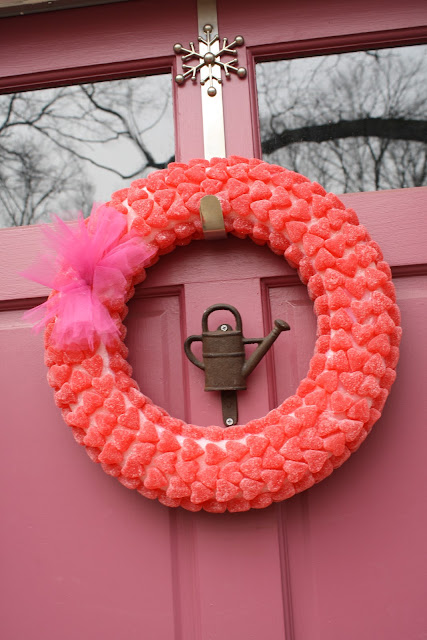 Unfortunately over the course of a couple years and a move it had lost some hearts, and it just looked too pitiful to me.  So I made a new one yesterday.  I had a straw wreath on hand and I wrapped it with a fuzzy white yarn.  That was the longest part!  I also had some papier mache hears I had purchased from the craft store and had covered with book pages.  I had not used them for anything as I had felt uninspired and left them alone.  I decided to use one of those hearts, and I also added some watercolor paint to it in shades of pink and red, and a touch of purple.  I really wanted to use the side of my heart that had an image, but once I had it all painted, I preferred the side that was mostly text.  Here are the two sides so you can see… 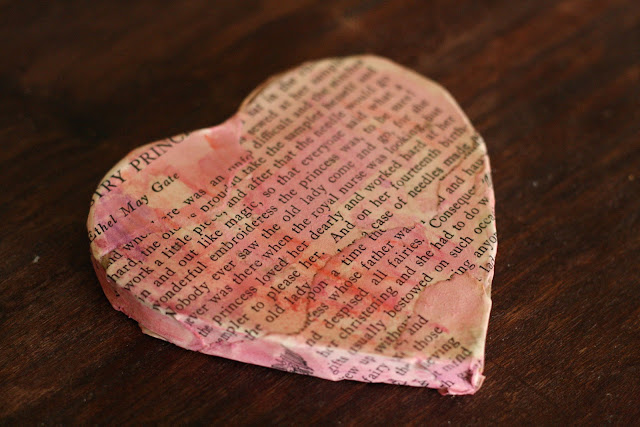 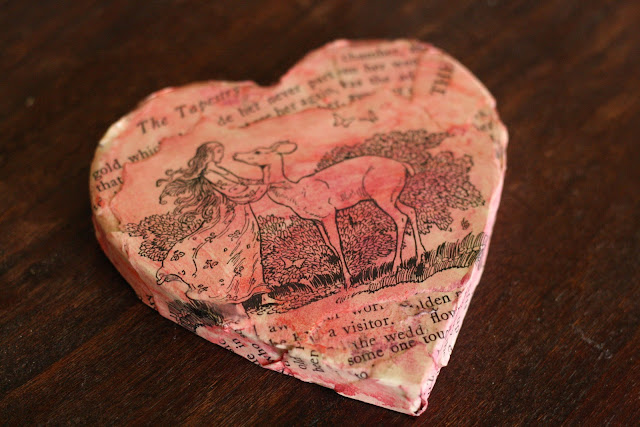 I searched my yard for the perfect twig with the shape of the fletching of an arrow.  I made the point of an arrow by using a piece of thin metal I had. (My neighbor who knows I am craft gave me a bunch of stuff and this metal was in there).  I folded the metal in half, cut a triangle shape with the long side at the fold.  Then I cut a piece in the fold to slide onto my twig.  I hot glued the points and sides of the arrow closed so it stayed in place on the branch.  And finally, I hot glued the heart and arrow to my wreath.
Ba-da-bing.  Ba-da-boom.  A heart and arrow wreath was born. 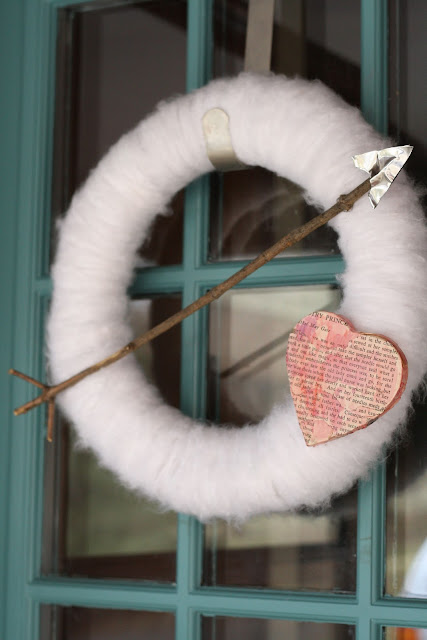 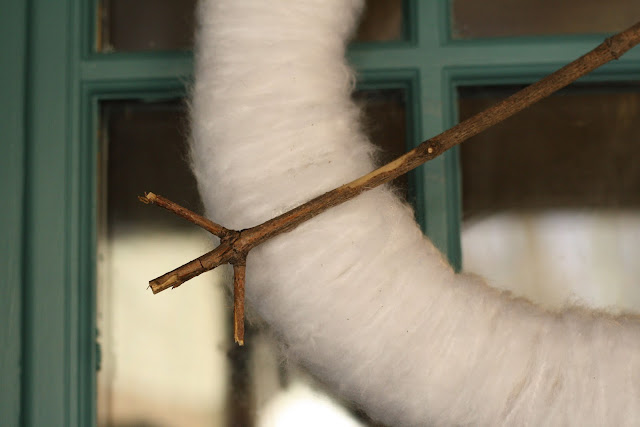 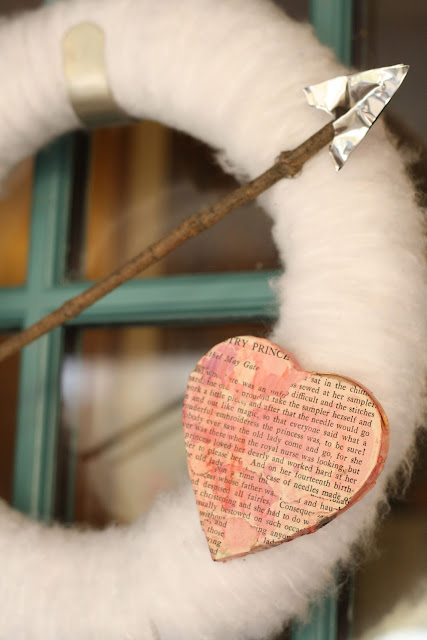 All in all, it was pretty inexpensive and easy to make!

And now, WOO HOO!!! It’s Friday!  I have family fun night at the neighbor’s tonight, basketball game and my first local wine & design at my house tomorrow, and sunday, SUPER BOWL!!!  We are having some friends over, and I am sure it will be a good time, seeing as we live in Maryland!  Go Ravens!!!!